Last July the girls won the Engineering prize (Junior category) for their Electronic Pet Tracking device. The judges were very impressed with their new concept design and how well they presented their idea and understanding of the programmable circuit they had constructed. They won a place at the UK finals at the Birmingham NEC this March.

There were over 220 finalists. Our Year 9 girls were awarded 'runners up' in the competition.

Congratulations to the girls and a special thank you to out STEM Ambassadors for their support.

The UK is a nation of pet lovers especially amongst ageing citizens who rely on the company and comfort of owning a dog. Each year around 500,000 pets go missing each year, and only 34% are ever found. The Project Team from Westcliff High School for Girls started work on their “Pet Tracker Pros” exclusively to address this problem. There are already various pet tracker products on the market, but they either have a very short range, or are prohibitively expensive, and so the brief was to create a low-cost, eco-friendly tracker that would work using the mobile phone network. A key aim identified early on in the research phase of the project was that the product should be a simple, easy-to-use product allowing ageing users to safeguard their pets and track their whereabouts reliably.

In the first year of the project, a basic short-range prototype was made as the team worked towards their bronze Gold Crest Award. This involved making some concept models and designing a handheld tracker and direction-finding aerial. For the second year, a new design was called for to extend the range, and so it was decided to make use of GPS satellite tracking technology and a GSM phone module mounted inside a module attached to a pet’s collar. The tracker uses mobile phone technology to accurately transmit the location of the pet direct to the owner’s mobile phone on receipt of a text message sent to the collar.

Putting together the second-generation prototype has involved the team in several STEM activities, including creating a detailed product specification, producing vacuum-formed models of the collar, basic electronics and soldering, programming the A7 chip used for the transmitter, and researching how to send and receive data using the collar transmitter over the mobile phone network using a low-cost GSM module and SIM card.

Teamwork has been key to designing and developing the project, with the four girls splitting the various tasks between them, and taking guidance as needed from teaching staff and the volunteer STEM Ambassadors. The team had the opportunity to demonstrate their product at the 2018 Chelmsford Science & Engineering showcase event alongside projects from other local schools in the first half of 2018.

The team has ambitious plans for a third-generation prototype, which would be smaller and make use of a dedicated app for better integration with a pet owner’s smartphone. With 88% of people surveyed expressing a concern that their pet could get lost, there is a clear market for an affordable and easy-to-use pet tracker such as the one designed by the four-girl team at Westcliff High School for Girls. 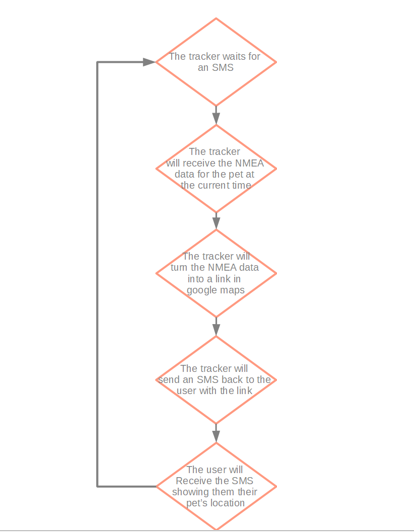