Erin Stoner, WINNER of the Jack Petchey Speak Out Challenge 2018 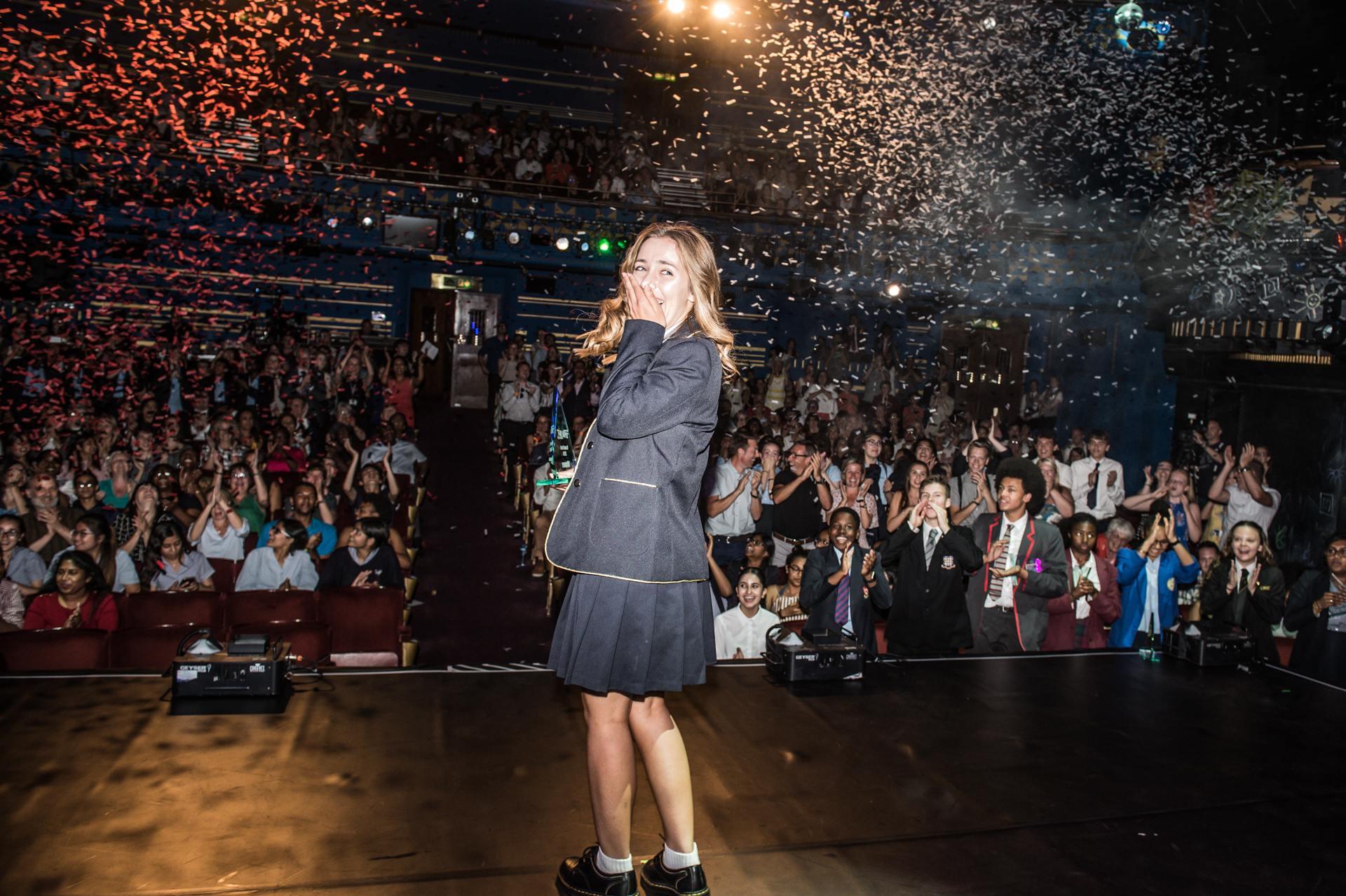 Fifteen-year-old Erin Stoner from Westcliff High School for Girls, Southend and Rochford, wowed a packed audience at the Cambridge Theatre on Monday 2nd July and was announced the year’s winner of this year’s Jack Petchey’s “Speak Out” Challenge! – the largest youth speaking competition in the world.

Erin talked about the “one in 100 people” that have a stutter, and her experience of having a stutter “people often forget that stuttering isn’t like it is in the movies; it’s not sweet or shy or cutely vulnerable or funny […] it’s breathlessness; it’s choosing what you get off the that menu because you know how to pronounce it […] it’s hating the name your mother gave you because you know you stutter on ‘e’s”.  Erin then went on to say, “No one wants to make a speech about a speech problem surrounding their speech problem” and summed up with the message that, “I want to be up here because I know that my 8-year-old self would never believe me if I told her that one day I would be in front of the Cambridge theatre, a 1000 people, and on that day that my voice will flow like the river Nile between the seats, one day”.

HM Chief Inspector Amanda Spielman said: “It was extraordinary and wonderful to see these young people express their thoughts so brilliantly.”

Speaking about the young people who took to the stage, Remee Patel, of BuzzFeed and Grand Final Judge commented: “Everyone showed real confidence and talent and I was absolutely blown away by how engaging, charismatic and intelligent each contestant was.  They should all be so proud, it was a truly beautiful thing to watch.”

Erin will receive £2,000 for herself and £3,000 for her school, Westcliff High School for Girls, Southend and Rochford. Speaking about the experience she said “I’m absolutely speechless. This has been the most extraordinary experience. This programme gives so many young people the opportunity to express themselves through public speaking that they simply deserve that no other project gives. The skills of public speaking are often over-looked and forgotten so thank you Speakers Trust and Jack Petchey Foundation for offering me this amazing opportunity.”

Second place was awarded to Maddie Parker, of Lady Margaret School for her informative and persuasive speech on votes at 16. Third place went to Alexia Loizou from Greenwich Free School and she spoke about what makes a house a home. Fourth place was awarded to Oliver Vallance from Ormiston Rivers Academy for his speech on drama and the arts.

Jack Petchey’s “Speak Out” Challenge! is designed and delivered by Speakers Trust and is funded and supported by the Jack Petchey Foundation to encourage 14 and 15 year-olds to develop public speaking and communication skills as well as building self-esteem and confidence. Now in its 12th year, over 19,800 young people in 500 state schools across 37 regions throughout London and Essex took part in this year’s Challenge. 191,000 have participated since it started.

During the academic year, each school has received one free one-day workshop in public speaking and communication skills. The students’ confidence in speaking to an audience, without notes, is measured at the beginning and at the end of the day.  During 2017/18 self confidence in participants across London and Essex leaped by 62%.

Trudy Kilcullen, Chief Executive of the Jack Petchey Foundation said: “Congratulations to the winner, Erin Stoner who inspired us talking about how she overcame her speech impediment to win this a public speaking competition! Congratulations also to the more than 19,000 who took part. Every single participant gained communication skills and boosted their confidence. This is the lasting impact of Speak Out.”

Commenting on the evening’s speakers Russell Findlay, Chief Executive of Speakers Trust said: "It was inspiring to hear such positive messages from young people on the issues that matter to them.  As well as unlocking by developing important life skills, our aim is to ensure that young people's voices are heard.  Adding in tonight's audience means that, over the year, our young speakers have been heard by more people than will attend the World Cup Final!" 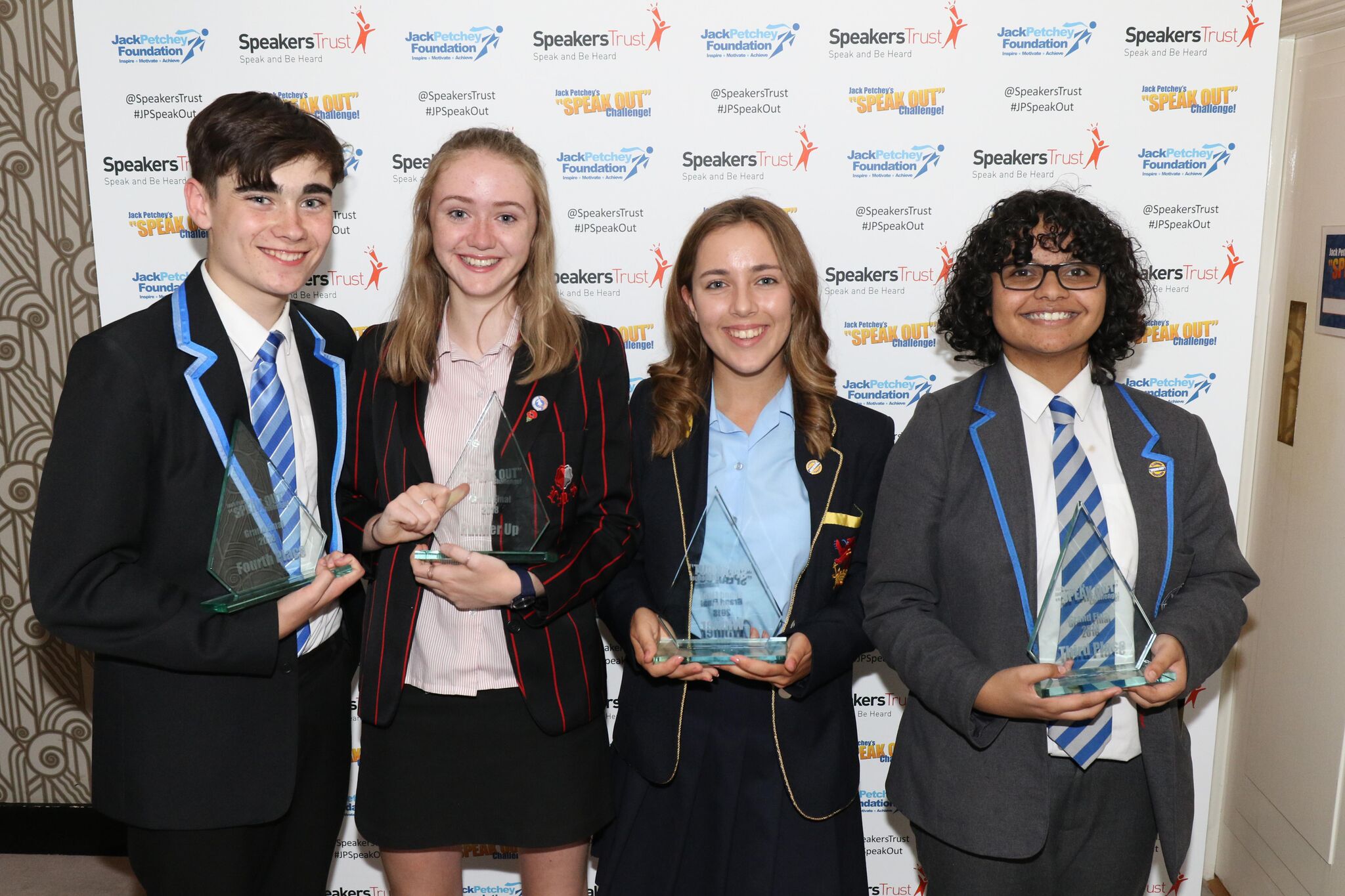 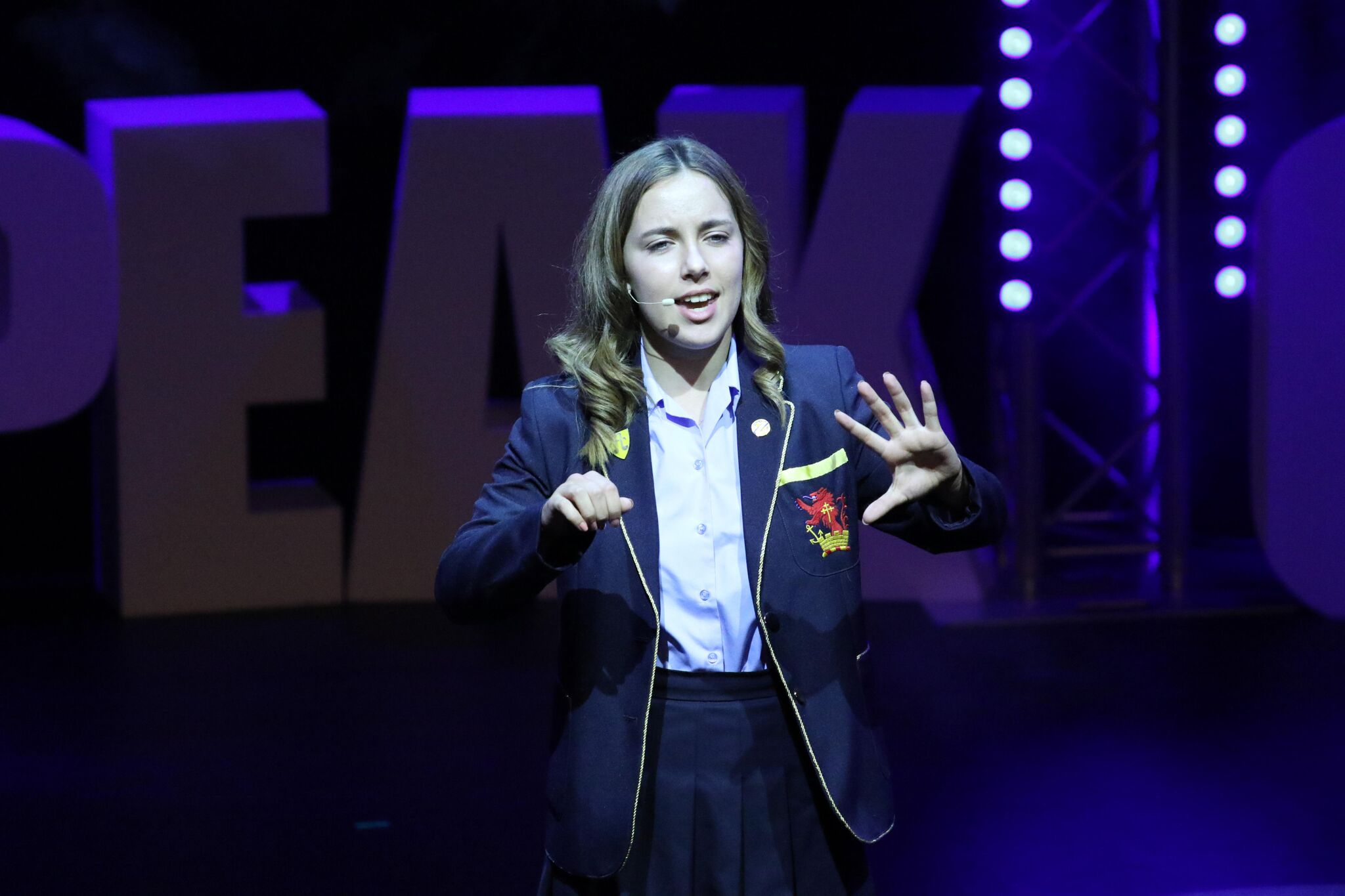